skip to main | skip to sidebar

By Peggy Redshaw and Jerry Lincecum,
with Photos by John Ramsey

History Day at Hagerman, held July 29 at the Wildlife Center, drew an audience of more than fifty, but only a handful were former residents of the town  that Lake Texoma swallowed up in 1944.  Denison Dam was completed in Dec. 1943, and the coffer dam that had held back the waters of Red River during construction was breached in Jan.  Three months later, the town of Hagerman was under about a hundred feet of water.  It had already been reduced to a skeleton, as numerous houses and other buildings were relocated.  Nowadays, when the lake waters recede (as they did last summer), one can see the remains of a few foundations on the bottom of Big Mineral. 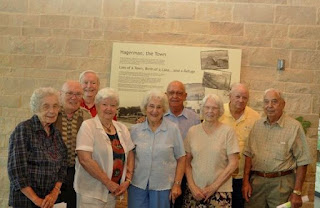 Those present for the discussion listened carefully to Jean Shires Hughes, whose family lived in the MKT section house in Hagerman.  They had been among the last to leave, since the railroad wanted Hughes to remain there as long as possible.  Jean recounted in remarkable detail a typical morning she spent as a child making her way through Hagerman, greeted by residents and merchants who were happy to have her stop by and visit. 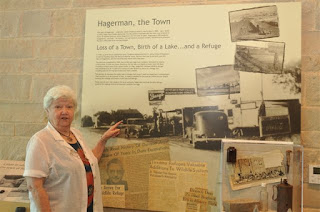 Jean Shires Hughes points out  features of the town of Hagerman in the History Exhibit at the Refuge.

The family of Bob Stephens was also late in moving out of Hagerman, and he recalled that they drove through some rising water on the road as they departed.
Claud Crook spoke of entering first grade at Hagerman School in the fall of 1943 and then, after the rising of the muddy waters, having to transfer to Pottsboro in January.  Melvin Brown remembered the German POWs who worked to clear brush from the area in 1943.  Joel Bassett has stories from his grandfather, who constructed the POW camp near the spillway, as well as documents he has researched on the project.
Melba (Lewter) Yankovich recalled the presence of US Army troops from Camp Howze, whose job was blowing up the bridges on county roads that were soon to be under the lake.  In fact, the lake filled so quickly that not all the bridges were demolished as planned.
The Friends of Hagerman, who organized the History Day program, consider it very successful.  Plans are underway for follow-up interviews with some of the former residents of Hagerman.  We hope to share more of their stories in future blog posts.

Note:  Links to additional articles about Hagerman, Texas can be found on the Refuge page of the Friends website.
Posted by Friends of Hagerman at 5:25 AM